Warcraft is a movie directed by Duncan Jones and produced by Legendary Pictures. It began filming at the beginning of 2014 and has a release date of June 10th, 2016 in The United States of America.

Though little has been revealed about the content of the movie, it is reportedly set at the time of the First War. The story focuses on the war between the orcs and humans, capturing each side's way of thinking and delving into their varied and sometimes identical ideals. Anduin Lothar plays a prominent role for the humans, while the orcs' main driving character is reportedly Durotan, the father of Thrall.

Since it is set at some point during the First War, there are some plot points that can be expected - though it remains to be seen how strongly the writers have stuck to canon:

There are a number of characters that may make an appearance in the movie since they appeared at some point during this time period. For the human side of things we might see Khadgar, Adamant Wrynn III and his wife Varia, and perhaps even Aedelas Blackmoore, depending on if the entirety of the First War is played out.

For the orcs any of the warlords featured in Warlords of Draenor are possible, most prominently Blackhand and his lieutenant, Orgrim Doomhammer. Garona is also possible, as is Durotan's mate, Draka.

In a May 9, 2006 press release, Blizzard Entertainment and Legendary Pictures (makers of Batman Begins and 300) announced that they will develop a live-action film set in the Warcraft universe. Legendary Pictures has acquired the movie rights for the game universe, and both companies are now focused on translating the Warcraft experience to the big screen. Read more about it in the press release.[9] Uwe Boll attempted to apply for the job of director, from which Blizzard CEO Paul Sams replied "We will not sell the movie rights, not to you…especially not to you."[10] At BlizzCon 2008, according to Mike Morhaime, a script was being written.[11]Chris Metzen mentioned that the film will be action-packed and violent, stating "We're definitely not going to make a G or a PG version of this. It's not PillowfightCraft."[12]

The live-action film was set for release in 2009,[12] but was later rescheduled to 2011.[13] On July 22, 2009, Blizzard Entertainment announced that Sam Raimi would become the Warcraft movie director, but in July 2012 he told Crave Online that he would not direct due to committing to the movie Oz: The Great and Powerful.[14]

In 2010 it was announced that Filipina cosplay goddess Alodia Gosengfiao would likely star in the movie,[15][16] but this was never confirmed by any official sources.

As of early 2012, the movie has still not been announced to be in production, so the chances of it being made are getting lower by the year. At Comic Con 2011, Chris Metzen said the movie was not dead, but gave few useful details saying it was still in the "treatment stage".[17] In mid-March 2012, Nethaera said the movie is "still on the radar" with no other update.[18]

According to IMDB, the manuscript writer will be Chris Metzen. (Jesse Wigutow was mentioned, but has been removed).[19] IMDB information on pre-release movies should be taken as suspect, though. IMDB generally only removes false information if someone reports it.

Not much happened thru late 2012, but in late January 2013, Legendary Pictures announced that director Duncan Jones had been attached to the production,[2] sparking some hope the filming might start. No specific development news has come out so far in Spring 2013, but lots of indirect evidence of film production has cropped up. However, previous Director, Sam Raimi, did explain why he left the project in 2013. He revealed that a lot of pre-production work was done by him and Robert Rodat (script writer), but Blizzard effectively vetoed their work and he largely blamed it on their mismanagement.[20]

The film now appears to be real with an official announcement and short teaser at Comic-Con 2013.[21] The film is supposed to begin principal photography some time in early 2014.[22]

A very short visual teaser for the film was introduced by current director, Duncan Jones, at San Diego Comic-Con.[21] Here is a brief description of the teaser which was not released to the public:[23]

A view of a desolate, dry landscape full of rocky outcroppings that pans to a scruffy, armored human soldier drinking water from a leather skin. A cage with rocks in it is shown followed by a squeaking noise as a green tinged sky is shown with dark clouds and green lightning. The waterskin is tossed to the ground and the soldier draws his sword with a sound of metal ringing off metal. The human walks over to the skeleton a fallen soldier and picks up the soldier's shield. He smashes his sword on the shield, apparently testing it. Cut to the muscled green arm (likely of an orc) of a creature heading toward the soldier. They circle each other with flashes of green skin and some armor as they charge each other. An extreme closeup of the orc as it raises its hammer and brings it down as the human raises his shield. Cut to black. A Warcraft logo. And then the Blizzard Entertainment logo.

Filming in Vancouver, release in 2015

CTV News (of Canada) announced that filming would begin in January 2014 in Vancouver with a release date sometime in 2015.[22]

Officially announced to release in late 2015

Apparently the next installment of the Star Wars franchise was scheduled for late 2015, so it apparently prompted the studio to move the Warcraft film release to March 16, 2016.[24]

According to the LA Times: "...Universal, a unit of NBCUniversal, will market, co-finance and distribute Legendary films for five years beginning in 2014..."[25]

First conceptual art of Teldrassil, which was expected to make an appearance in Warcraft, but the movie has probably completely changed since this old art.

Official new movie logo revealed at BlizzCon 2014.
Add a photo to this gallery 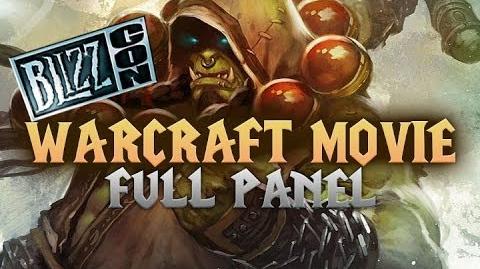 warcraft.moviechronicles.com World of Warcraft - The Movie

IGN.com Why Warcraft Was Easier to Adapt as a Movie than Mass Effect

The Atlantic Wire 'World of Warcraft' Gets the Movie Treatment

io9.com We just saw the first mighty teaser for the Warcraft movie!

BlizzPlanet Sam Raimi Reveals Why He Departed the Warcraft Film

Guardian.co.uk: Film Blog World of Warcraft: how to make the movie really like the game

FansShare.com When will Call of Duty and World of Warcraft movies be made?

WowInsider Warcraft Movie will not be directed by Sam Raimi