Taunt Can mean several things in World of Warcraft.

Taunt can refer to the class abilities that allow players to attract attention of a mob. They include the following:

Other classes have high aggro abilities that generate set amount of threat. They include:

These abilities do not function identically. "True" taunts both force a mob to attack the taunter for a few second and give the taunter enough threat to top the aggro list. Other abilities (Challenging Roar and Shout, Mocking Blow) compel temporary attacks but do not give aggro; if the taunter fails to build aggro quickly, the monster will go back to its previous target when the effect expires. Still others merely generate a large chunk of threat, but do not compel mobs at all. 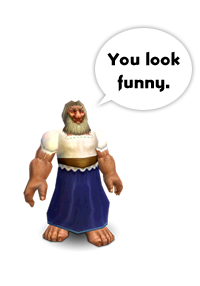 /y I slept with ALL your Mamas!

/y I would have been your daddy, but a dog beat me over the fence!

(this will look to other players as though Mobs were responding to your insults) Template:Taunt

Retrieved from "https://vanilla-wow.fandom.com/wiki/Taunt?oldid=19176"
Community content is available under CC-BY-SA unless otherwise noted.