Stormwind is the capital city of the Kingdom of Stormwind and the largest human city of Azeroth. It is located in the northwestern part of Elwynn Forest. The child king, Anduin Wrynn, resides in Stormwind Keep, surrounded by his body guards and advisors, Highlord Bolvar Fordragon (the regent), and Lady Katrana Prestor. The city is named for the occasional sudden squalls created by a ley line pattern in the mountains around the glorious city.[citation needed]

During the First War, the Kingdom of Azeroth, including its capital, Stormwind Keep, was utterly destroyed by the Horde and its survivors fled to Lordaeron. After the orcs were defeated at the Dark Portal at the end of the Second War, it was decided that the city would be rebuilt, even surpassing its former grandeur. The nobles of Stormwind assembled a team of the most skilled and ingenious stonemasons and architects they could find. Under their direction, Stormwind was rebuilt in an amazingly short period of time. Now, at the end of the Third War, in the newly named Kingdom of Stormwind, it stands as one of the last bastions of human power left in the world.

With the fall of the northern human nations, Stormwind is by far the most populated city in the world. Boasting a population of two-hundred thousand people (predominantly human), it serves in many ways as the cultural and trade center of the Alliance, even with remote access to the sea. The humans living in the city are generally carefree and artistic, favoring light and colorful clothes, cuisine and art.

However, the people of Stormwind find it difficult to accept Theramore's role as the home of the new Alliance, convinced not only that Stormwind should be the legitimate heir of Lordaeron's role in the past, but also that Theramore is doing little against the worsening situation within the Eastern Kingdoms.

Excerpt from the World of Warcraft Game Manual:

"The city of Stormwind stands as the last bastion of human power in Azeroth. Rebuilt after the Second War, Stormwind is a marvel of human design and engineering. Stormwind's guards keep the peace within the city's walls, and its young king, Anduin Wrynn, rules from his mighty keep. The Trade District bustles with trade from across the continent and beyond, while adventurers of every sort can be found wandering the streets of old Town. Unaffected by the ravages of the Scourge in the north, Stormwind still faces its own threats, both from without and within."

The city is made up of roughly rectangular districts separated by canals. 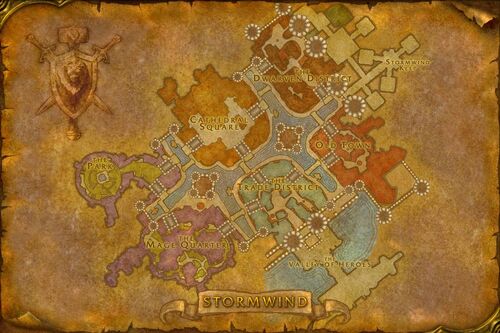 From his throne in Stormwind Keep, the boy king Anduin Wrynn IV rules with the support of Highlord Bolvar Fordragon and Lady Katrana Prestor. Grand Admiral Jes-Tereth is the officer in charge of the kingdom's fleet. In the Cathedral of Light, Archbishop Benedictus presides over the clergy of Light, and in the Valley of Heroes, General Marcus Jonathan stands sentinel on his horse, flanked by his topmost commanding officers, Major Mattingly and Field Marshal Afrasiabi. Other guild masters include High Sorcerer Andromath and Master Mathias Shaw, in charge of Stormwind wizards and thieves guilds, respectively.

*A portion or version of this article was copied from a

Retrieved from "https://vanilla-wow.fandom.com/wiki/Stormwind_City?oldid=27476"
Community content is available under CC-BY-SA unless otherwise noted.