Recommended character levels range from 26 to 45 for a group of five, depending on which wing is attempted. The Graveyard is intended for players between level 26 and 36, and can be done even without a full group, usually with 3-4 people. The Library is for players between level 29 and 39, and requires five people to complete at this level range. The Armory also requires 5 people, although 4 can probably down Herod, and is intended for players between level 32 and 42. The Cathedral is definitely the toughest of the four wings, with multiple rough pulls, and will require 5 people. The two bosses, Scarlet Commander Mograine and High Inquisitor Whitemane, are fought at the same time. The Cathedral is tuned for players between level 35 and 45. All four wings allow anyone level 21 or higher to enter. Due to the large number of low-level blue items, SM is a favorite dungeon for low-level players. High-level players also solo SM in order to get all the blue items, [Silk Cloth], etc., to sell; and SM was a good source of money prior to The Burning Crusade. You can also do experience runs up to level 45, but past that the low amount of experience is not worth the time.

All of the instanced wings of the Scarlet Monastery are stored on the same map. That means, if you could fly, you can enter the Cathedral, fly, and end up in the Graveyard wing.

In Mists of Pandaria

This section concerns content that is not yet released.

During [[Blizzcon 2011][, it was announced that level 90, Heroic version of this dungeon would be available for the upcoming expansion

Mists of Pandaria.[citation needed] Also, the dungeon will be revamped from 4 wings to 2 wings with several different bosses.[1]

The Monastery was once a proud bastion of Lordaeron's priesthood - a center for learning and enlightenment. With the rise of the undead Scourge during the Third War, the peaceful Monastery was converted into a stronghold of the fanatical Scarlet Crusade. The Crusaders are intolerant of all non-human races, regardless of alliance or affiliation. They believe that any and all outsiders are potential carriers of the undead plague - and must be destroyed. Reports indicate that adventurers who enter the monastery are forced to contend with Scarlet Commander Mograine - who commands a large garrison of fanatically devoted warriors. However, the monastery's true master is High Inquisitor Whitemane - a fearsome priestess who possesses the ability to resurrect fallen warriors to do battle in her name. 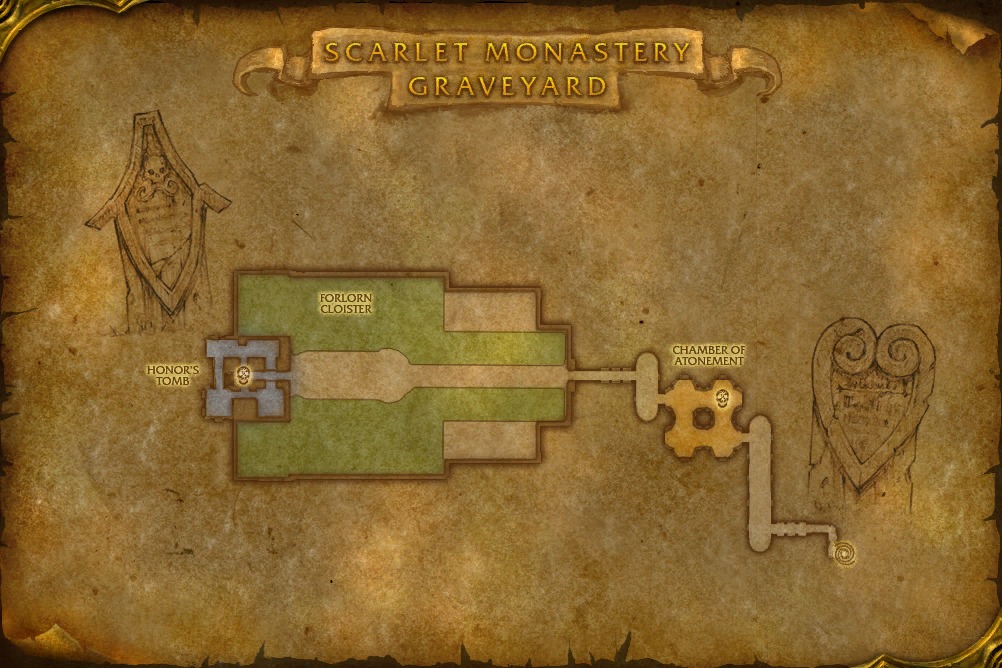 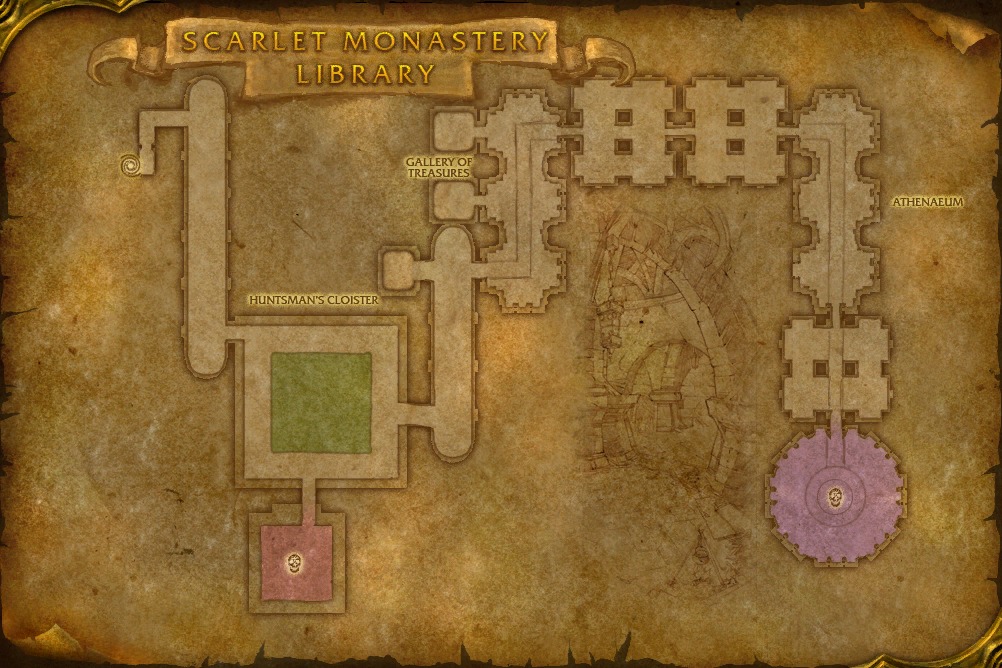 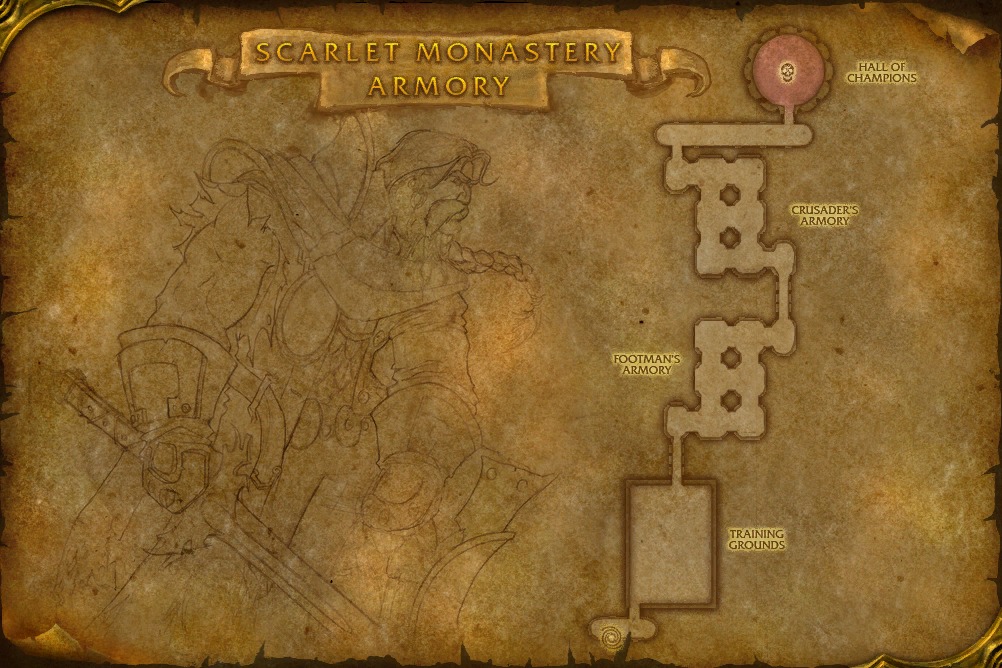 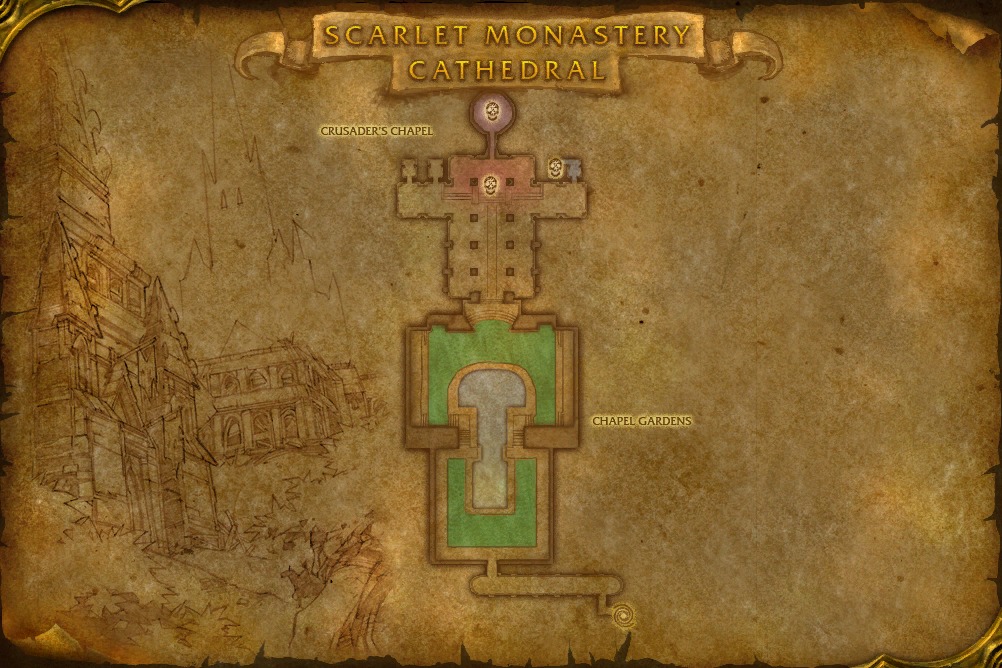 Cathedral
Add a photo to this gallery

The Graveyard, the left-most entrance, is the easiest and smallest. Like the Library, it does not require [The Scarlet Key] to enter. The mobs are almost entirely undead; and, unlike most instances, most are non-elite.

In the Chamber of Atonement

In the Forlorn Cloister

The Library, the right-most entrance, consists of three sections: the Huntsman's Cloister, with Scarlet Beastmasters and the boss Houndmaster Locksey; the Gallery of Treasures; and the Athenaeum with the boss Arcanist Doan and the chest containing [The Scarlet Key] (required to open the Armory and Cathedral doors).

The Armory, the second entrance from the right, requires either [The Scarlet Key] from the Library or some other method of unlocking to enter. Like the Library, it starts with a cloister. Lots of humanoid guards block the way to

Herod (the main boss and Scarlet Champion). Any mistake may cause the party to pull too many mobs and die. Herod's locked chamber can be opened the same ways as the front door. Once inside, you will fight him, and him alone. The battle is not over, though; as afterward 30 Trainees spawn outside the room, run in, and swarm you. Easy to kill, they will once in a while drop [Tabard of the Scarlet Crusade].

The Armory contains different mobs from the Library:

The Hall of Champions also has a collection of large statues of the order's most praised heroes:

The Cathedral (the second entrance from the left) is locked like the Armory, requiring the same [The Scarlet Key] or other unlocking method. It also starts with a cloister, the Chapel Gardens; and is followed by the Crusader's Chapel, which houses the three bosses. As in the rest of SM, fleeing humanoids can easily pull lots of other mob groups. Before engaging the final bosses,

Scarlet Commander Mograine, all of the Cathedral's interior must be cleared of any other enemies, or they will come to their aid. Hunters' traps can freeze or slow Morgraine and Whitemane, so you can have more time for ranged attacks. Another approach is to send either 2 tanks or combat pets to take the bosses and have everyone else be ranged and healers. Area attacks and other multi-target spells are useful. After Mograine is killed, Whitemane will come through previously locked doors and resurrect him, and they will heal each other to 100% health. For some classes, the Cathedral is soloable, starting at around level 50. It is a particularly valuable training ground for Hunters, since they can learn much about double-mob pulling and trapping here. Warlocks can use the Succubus to control humans and prevent them from running.

This section concerns content that is not yet released.

Retrieved from "https://vanilla-wow.fandom.com/wiki/Scarlet_Monastery_(original)?oldid=4178"
Community content is available under CC-BY-SA unless otherwise noted.