For the language, see Qiraji (language).

The qiraji are a race of insectoid creatures in southern Silithus. They once had a large empire.[citation needed]

Different types of qiraji are referred to as castes with a life-long occupation and responsibility in society. It seems to be that every caste has a leader who are under the command of the Twin Emperors: Vek'nilash and Vek'lor.

The qiraji are able to create servants of living obsidian stone, the obsidian destroyers, anubisaths, and horusaths. 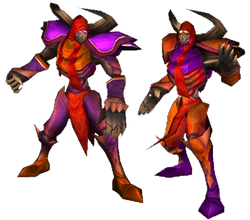 At the ancient continent of Kalimdor's center was a mysterious lake of incandescent energies, the Well of Eternity. It was the true heart of the world's magic and natural power. From this magical ether the Silithid were born. As the fallen Old God, C'Thun, recognized their appearance, he attempted to sunder the world that it once held in its unmerciful grasp. The Old God created avatars from the silithid in its own image. These avatars were to be known as aqir. Sapient and with purpose, the aqir worked feverishly to build a force capable of laying waste to the world that would betray their god, with the silithid as their minions.[1]

Not long after the troll empires divided the insectoid kingdom of the aqir, the aqir that travelled north would eventually become the race we know as the nerubians today. The aqir that travelled south ransacked and overthrew a titan research station near Uldum, renaming themselves the qiraji and calling their new home Ahn'Qiraj.[2]

The qiraji spent the next thousands of years building an army capable of exacting revenge upon the whole of Kalimdor.[3]

The War of the Shifting Sands

Only the night elves, who once inhabited Silithus, stood in their way. The War of the Shifting Sands raged for long, agonizing months. The night elves were always on the defensive, always outnumbered, always being driven back. The whole of Silithus was soon engulfed by the silithid and their qiraji hosts. The night elf army was pushed back through Un'Goro, to the borders of the Tanaris desert. Out of desperation, the night elven leader Fandral Staghelm sought the aid of the elusive bronze dragonflight. Their initial refusal to interfere was reversed when the brazen qiraji attacked the Caverns of Time, home and province of Nozdormu, the Timeless One. Nozdormu's heir, Anachronos, agreed to enlist the bronze dragonflight against the marauding qiraji. Every able-bodied night elf joined the cause, and together they forged a campaign to retake Silithus. Even with the might of the dragons backing them, however, the sheer numbers of the qiraji and silithid proved overwhelming. And so Anachronos called upon the progeny of the remaining flights. Even so, it seemed that the numbers of qiraji and silithid were never-ending. So the dragons and Fandral hatched their final, desperate plan: to contain the qiraji within the city, to erect a barrier that would confine them until a more hopeful stratagem could be devised. With the blessing of Elune the barrier was erected before their eyes, rock and stone and roots from beneath the sands emerging to create an impenetrable wall. Even the winged soldiers who attempted to fly over the barrier met with an invisible obstruction that they could not pass. The qiraji who remained outside the wall were quickly slain. The dragon told Fandral that should any mortal ever wish to pass the magical barrier and access the ancient city, they need only strike the scepter against the gong and the gates would open. He then handed the scepter to the arch-druid.[4]

Hoping to contain the threat for all eternity, the arrogant Fandral then broke the scepter, both insulting and angering the bronze dragonflight. His actions that day created a rift between the allies that has existed to this day.[5]

The threat posed by the qiraji has thus remained behind its wall for thousands of years. Recently, however, the unmentionable Old God slowly awakened from his slumber beneath Ahn'Qiraj. Behind the gates of the Scarab Wall, the merciless qiraji stirred once again. Empowered by the Old God, C'Thun, the qiraji prepared their legions for a worldwide assault to avenge their bitter defeat at the hands of the night elves a thousand years ago.[6]

It was discovered that some of the qiraji were finding ways past the wall. Anachronos, the bronze dragon, helped the adventurers of Azeroth open the Scarab Wall to prevent more incursions. The mortal races have now banded together to confront the evil qiraji in their own land.[citation needed]

Opening of the Gate

A champion has opened the gate and the Horde and Alliance have driven the armies of the qiraji back into the ruins in retreat. It now falls to heroes to delve into the lair of the qiraji and put an end to their masters once and for all.[citation needed]

Harbinger Skyriss is one of the qiraji entities that the naaru kept locked up within the Arcatraz. As a servant of the Old God, he seeks to usher in his master's vision of conquering all of the worlds in the universe.[7] He corrupted Warden Mellichar into releasing all the prisoners within the Arcatraz.[8]

Because there is no reinforcement for this theory, he most likely blusters.

The qiraji and their servants wield items made with the rarest and finest materials: bones from gargantuan ancient creatures, gems from the depths of the earth, metals pure and strong.[10] The most powerful qiraji wield items of such might they'd give pause even to a dragon.[11] The rings worn by the qiraji lieutenants are rumored to grant them formidable abilities. The corrupted gems that adorn them could, in theory, be swapped out with more pure materials to create uncorrupted versions of the rings.[12] It seems to be that female qiraji must constantly keep their face covered.[13][14][15]

Retrieved from "https://vanilla-wow.fandom.com/wiki/Qiraji?oldid=15510"
Community content is available under CC-BY-SA unless otherwise noted.