Ogres are large, brutish humanoids originally from Draenor. They were one of the last races of Draenor's giants.[3] Many were enslaved by the powerful Gronn. Several free ogre clans came through the Dark Portal before the First War. These ogres had a blood hatred to the orcs second only to their hatred of humans. They favored lands that were not frequented by orcs, and were seldom seen near other races' encampments.[4]

Other ogre clans were once allies with the Horde and some were enslaved by the Horde, rather than the Gronn. These enslaved clans were often used in experiments.[3] These included monstrous two-headed versions that were created by Gul'dan and brought through the portal after the First War to act as enforcers to quell needless infighting between the orc clans. However, eventually these clans broke free and went their own separate ways. Later, the Stonemaul Clan joined the new Horde under the leadership of the Mok'Nathal named Rexxar.

Ogre culture, such as it is, tend to revolve a great deal around warfare, violence, and acts of strength. Elimination of competitors is an accepted (in fact, it is the only) way to move up in the ogre ranks. The ogres have great admiration to those that can best them in strength or in combat, an admiration that far transcends anything else, including their hatred for other mortal races, specifically orcs and humans. There are rare but known cases of ogres bowing to the Horde when those have defeated them (such as the Stonemaul tribes) and even rarely the Alliance. (Also see Gordok, "King of the Ogres", and Ogri'la quest lines in The Burning Crusade).

Regular ogres and two-headed ogres are not spellcasters; the ogre magi make up the smarter, spellcasting versions of ogres.[5]

There is a great variety in the ogre species. Ogres average between 6 feet and 7 feet in height at adulthood, but continue to grow two inches to a foot at a time through a portion of their lives, as well as continuing to put on weight. A fully grown ogre would be between 8 feet and 25 feet;[6] the average for the larger ogres is 15 feet, though some ogres are small, barely larger than 6 or 7 feet.[7] At first glance, they may look lazy and fat, but they're actually incredibly strong. Their skin tones range in color from shades of peach to red, to deep blues and ashen black. They frequently have at least one horn on their head, and can have either one or two eyes.

Ogres have many as the same hairstyles as orcs and can grow hair on the chin and upper lip.

While ogres excel in strength, they are also rather slow-witted; this doesn't mean that they should be underestimated however, since they can possess a surprisingly brutal cunning. Still, most ogres are best suited to melee clobbering, though the two-headed ones are proficient in the mystical arts as shamans, magi and priests.

Many other races are coming to realize that ogres are not the stupid, lumbering two-headed beasts they once seemed to be. In fact, many of the ogre lords have rallied the remnants of their people that were scattered when the Horde fell. Though their plans are unknown, there is no doubt that these powerful, deceptively cunning warriors will gather their forces once more. According to the best estimates (RPG books), there are about 6350 ogres on Azeroth (Although certain tribes are not factored in). Still, they can be a significant and furious army if marshaled.

"Some ogres have two heads. Unfortunately, two ogre heads are not better than one — the heads rarely get along with each other, and two-headed ogres are just as dumb as their one-headed brethren."[8]

"Two-headed ogres often have compound names, which are actually the names of their two heads. For example, the famed ogre mage Cho'gall has two heads — Cho and Gall."[9]

Originally from Draenor, ogres were one of the last races of Draenor's giants. Some orc scholars believe the ogres were once intelligent and the dominant species of Draenor before the orcs rose to power. Orcs and ogres were enemies for generations until the rise of the horde. The warlock Gul'dan decided the orcs required the brute strength of the ogres in their war against the draenei. The ogres joined the horde in exchange for freedom from the tyranny of the Gronn and for providing food and weapons. Any ogres who stayed loyal to the gronn were ruthlessly conquered. Soon the ogres were broken, the race either forced into exile or enslaved and used in experiments. To this day, most ogres hate orcs with a passion, remembering the wars they fought against each other.[3] .[10]

Ogres in the Second War

The ogres were brought through the Portal after the First War to act as enforcers in an effort to quell needless infighting between the Orc clans. The ogres were subjected to experiments by the warlock Gul'dan using the stolen runestones of Quel'thalas in an effort to produce new spellcasters for the horde to replace the fallen necrolytes and warlocks. Gul'dan's work bore fruit and lead to the creation of the ogre-magi. This new generation of ogres were two headed, an extreme rarity among ogres before this, more intelligent and more magically gifted than normal ogres and were used to devastating effect on the alliance.[11]

Third War and Beyond

Following the defeat of the Horde the ogres left the orcs to their fate and spread out across Azeroth, some managed to travel to all the way to Kalimdor and founded mounds there. The ogres played no part in the defeat of the Burning Legion during the Third War, however, during Admiral Proudmoore's invasion of the new orcish kingdom of Durotar one tribe of ogres, the Stonemaul clan, did rejoin the horde under their leader Rexxar who overthrew the previous chieftain Kor'gall. Despite this most ogre tribes have remained independent and are now hostile to alliance and horde alike.[12]

Other ogre tribes continue to exist on the ruins of Draenor. Most of these are still enslaved to the gronn, but one tribe - the Ogri'la have freed themselves from their demi-god oppressors and are trying to forge a new, more peaceful existence for their race.

Many assume the ogres are insensate brutes, liking nothing more than destruction. Ogres have changed since the days of the Horde, however, possibly also due to their freedom from the influence of demons. More cunning than most give them credit for, ogre tribes keep somewhat at a distance from the other races as they have built a civilization. Villages are established in foothills, allowing ogres access to plains and forested areas.

The new civilization of ogres has somewhat of a patchwork quality to it. Tribes are experimenting with different approaches, observing the other races as they seek to find their own way. Some groups are nomadic, while others have started small agrarian communities. All hunt, either as a primary or supplementary source of food. While rivalries and conflicts occur, ogres place great stock in listening to elders and allowing moderation of disputes. There is a loyalty to the race and at least some respect for the other races, though ogre interests are always addressed first and foremost.

Ogres value endurance and insight more than simple strength. As strong as they are, they know that something out there is always stronger. Rangers are common among ogres, combining skill with the knowledge of the land.

Ogres test unfamiliar groups to determine their power and possible intentions. They try to avoid conflict, often by having ogre warriors make displays of aggression, smashing the ground and shouting at opponents, out of range of whatever weapons the opponents possess. As a last resort, ogres have some skill in formation fighting and will use a combination of charges and withdrawals to try to surround enemies. Ogres will throw spears at a distance in waves combined with the use of clubs, with possible magical support from ogre magi. When committed to a fight, these giants are completely dedicated, only breaking from an engagement if their leader commands it.

Despite their size and ferocious appearance, ogres are curious about the wider world and often seek to spread a more positive understanding of ogre culture. At the very least, an ogre hero can gain resources and allies for her tribe.[13]

Ogre society is based on violence and domination. The head of a tribe holds his position through sheer brute strength. Any member of the clan can challenge the leader to a battle to the death. The victor of this duel is declared the new ruler (or retains the position, if the incumbent emerges victorious). This ogre often takes to decorating himself garishly with whatever stolen armor and weapons he can get his hands on. Loot in a ogre clan is distributed by whoever can defend their claim. Thus, the strongest members are usually easily identified by their better armaments.

Besides their own tribes, ogres are often found employed as mercenaries, especially by the Goblin cartels, who see their extreme strength and slow wits as an asset. In Outland, ogre lords rule over the weaker and less intelligent ogres.

Ogres prefer to live in mounds, which are little more than caves or piles of stone built around steam vents, implying that ogres seem to prefer hot areas. Some ogre villages exist, but they are less common. Ogres are extremely destructive to their environment, and any area that they have lived in for some time can be distinguished by the piles of waste and excrement that they leave in plain view. Often, the dismembered remains of enemies and prey are hung on meat hooks, strewn about the ground, or otherwise left out for all to see.

Ogre females have not appeared in the games and only a few have been mentioned in the lore. The few ogre females mentioned in lore include the unnamed wife of Tharg, who died by the claws of the black dragonflight. Chief Ogg'ora was a female ogre sorceress and former leader of the Fire-Gut ogres.[14] One of Gro'ach the Wise's commanders among the Duskbelch ogres was a female barbarian named Vaxar.[15] In 2011 Hallow's End, new masks were added to the game, including an [Ogre Female Mask].

Ogres usually speak Low Common. Some of the more intelligent ones may speak Common or Orcish. Ogre linguists are rare, but a few exceptionally intelligent ogres learn the languages of their new friends.[16] Some ogre tribes know orcish as one of their primary languages.[17]

In Manual of Monsters Appendix Three two other type of ogres are mentioned: the Ogrillon and the Gauntling; however the validity of the source is disputed. 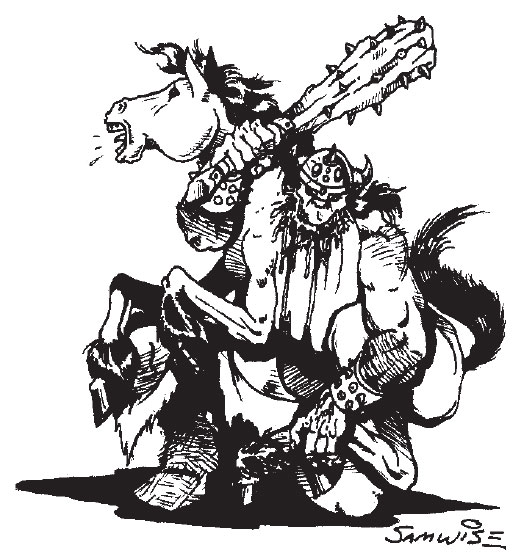 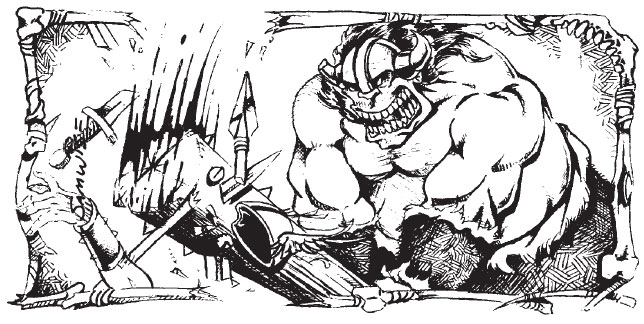 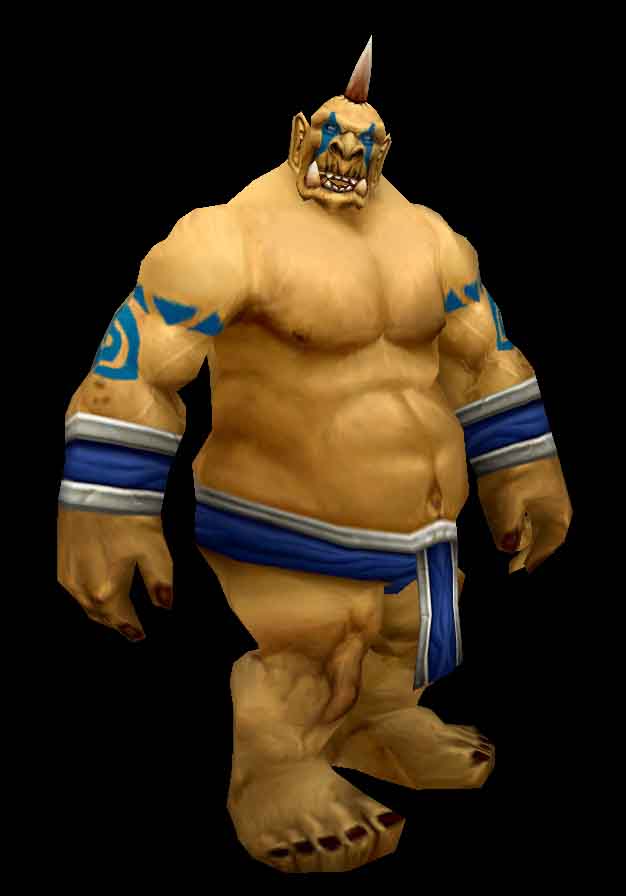 An ogre in WoW. 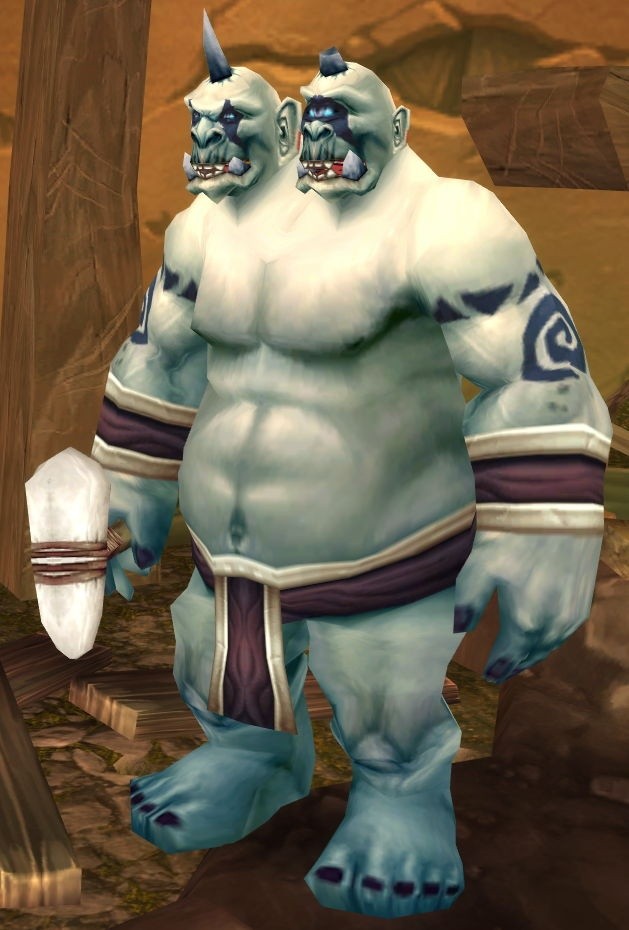 A two-headed ogre in WoW. 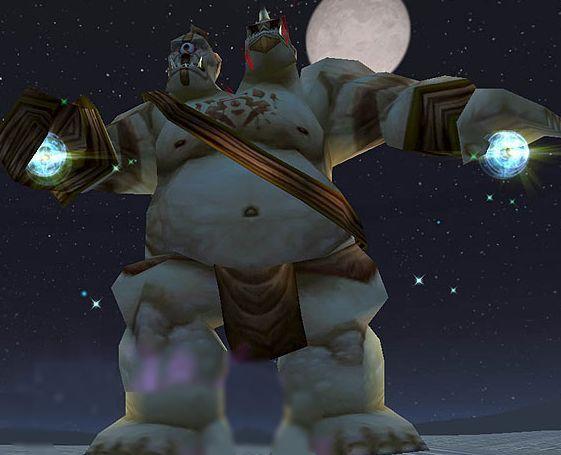 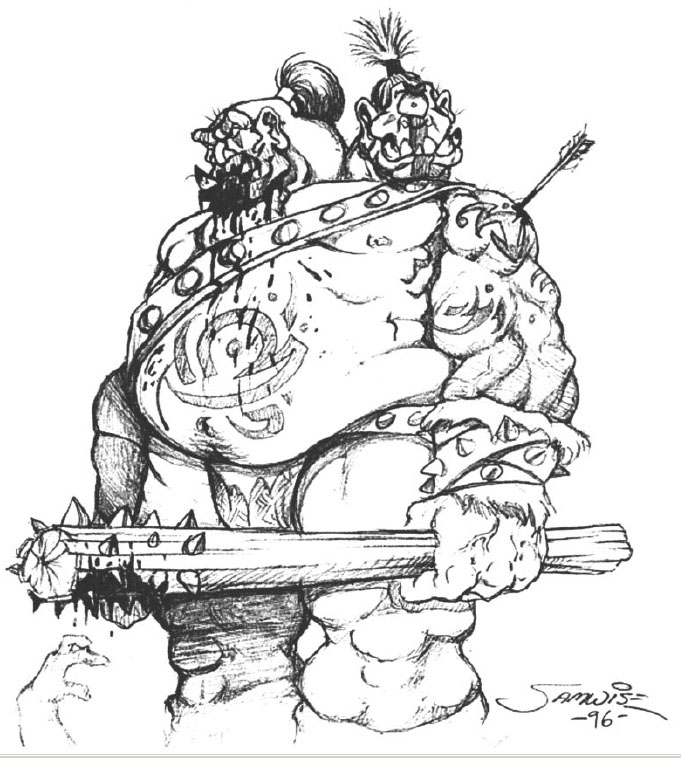 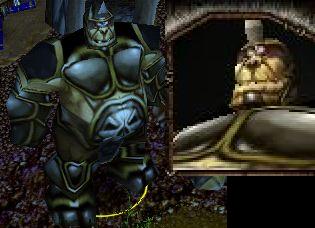 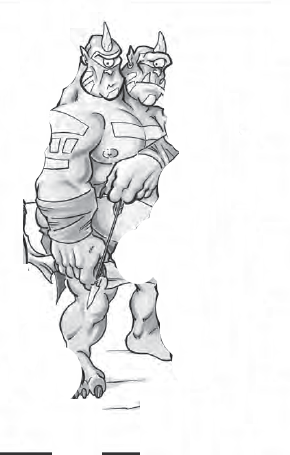 Ogre from Horde Player's Guide.
Add a photo to this gallery

Quotes from World of Warcraft:

Before World of Warcraft was released, Blizzard announced that two-headed ogres would become a playable race as an April Fools joke.

Retrieved from "https://vanilla-wow.fandom.com/wiki/Ogre?oldid=15671"
Community content is available under CC-BY-SA unless otherwise noted.