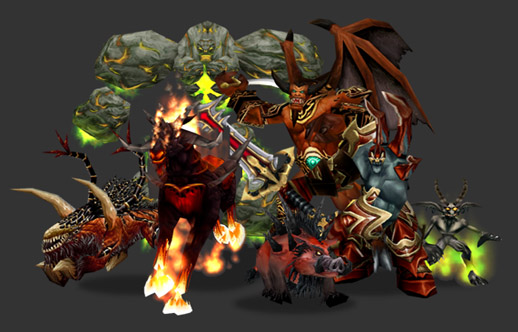 Not to be confused with daemon.

Demons are evil creatures that inspire dread and fear in mortals. Almost all demons are members of the Burning Legion, a group with phenomenal power, that roams the cosmos preying on worlds. All demons are evil.[1]

Most demons were once mortal creatures found on the worlds conquered by the Burning Legion, but have been transformed by their conversion into demonic beings. This change includes a powerful command of arcane energy. They define and control this arcane power with the force of their will, much as sorcerers and wizards do.[2] [1]

There are many types (see below) and races, most of whom typically serve either their own agenda or that of the Legion (they are often the same). For a description of the most important/famous demons visit the race pages or the Legion page.

There is some question as to the origin of the name "demon" in Azeroth. In Christie Golden's Rise of the Horde, it is insinuated that the word "demon" came from the Orcish word "dae'mon", meaning a soul that was evil, twisted, not right...much the same as the eredar word "man'ari". However, in the War of the Ancients Trilogy, the night elves refer to them as demons at the first coming of the Burning Legion — thousands of years before Rise of the Horde. Additionally, "daemon" without the apostrophe is a term used by both Horde and Alliance in varying sources, such as Warcraft I, Warcraft II and World of Warcraft: The Burning Crusade, including documents predating the First War. No matter the origin of the word, the meaning is still the same.

"If I have wings, why am I always walking?" - Dreadlord in Warcraft III

"Wings, horns, hooves...what are we saying, is this Diablo?" - Illidan Stormrage in Warcraft III

Usually demons have one or more of a set of demonic physical traits.

In Monster Manual there is a distinct breed of demons which use the "demonic" subtype.[2] This kind of demons are described in Manual of Monsters Appendix Three and as told before the description doesn't match the demons described in the Warcraft Universe.[4] Throughout the Manual fo Monsters the term "demon" refers to the minions of the Burning Legion,[2] but in the section of "demons" of the Appendix Three they refer to the demons of D&D.[4] However, the validity of the Appendix Three is disputed.

Retrieved from "https://vanilla-wow.fandom.com/wiki/Demon?oldid=15570"
Community content is available under CC-BY-SA unless otherwise noted.