All of the banks share the same vault; the neutral banks are equivalent to the faction banks. If you place items in one bank, you will be able to access them in another. (Canonically, this is accomplished through the use of Automated Teleportation Modules; ATM's for short.) However, players are not able to use the banks of opposing factions, because they cannot talk to the tellers. 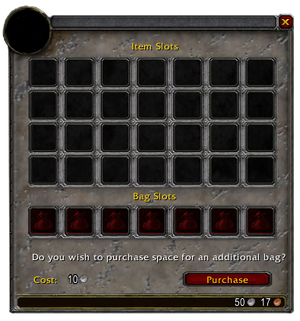 Initially a character's bank account (vault storage space) contains 28 item storage slots at no cost. An additional seven bag slots for more space are purchasable. These provide no additional item storage slots, but allow placement of a bag that has item storage capacity. The bags can be changed out and it is common practice to progressively place larger bags. The cost of the bag slots increases with each extra slot purchased starting at 10

for all slots (not including the bags that go into them).

Unlike a real bank, you cannot store currency within the bank, only items.

A bank alt (or bank mule) is a character that is usually level 1 and sits in a trade city near the bank and the Auction House. This character's primary use is for:

Where can I find bank branches?

All of the Alliance and Horde capital cities have bank branches:

Some neutral cities and towns have them as well:

Portable banks can be carried with players as items or abilities, giving access to the bank anywhere in the game. They reduce a player's need to travel to a bank, but, due to their long cooldowns (often an hour or more), they do not completely remove it.

Other uses of the term bank

Retrieved from "https://vanilla-wow.fandom.com/wiki/Bank?oldid=29731"
Community content is available under CC-BY-SA unless otherwise noted.